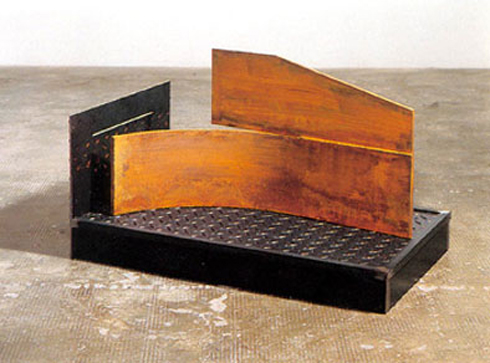 Silent streets, mute, indifferent, walked by relatives and friends, where a quiet privacy is maintained like a bucolic poetry. Perfumed with the fragrances of a laurel, a cypress or a bunch of chrysanthemums. The synthesis of a whole long trajectory which takes in many experiences and an infinity of different smells is what is common to the works in the series Silent Move, and in particular the sculpture Going my way (a title as paradoxical as the work itself) , and cemeteries A recovery of the lorry crates which are left immobile in rejection, the last resting-place of death and everything that surrounds transit is what Roqué has effected in thinking of silence as a universal feeling. It is, in away, the history of the world of cargo, of the transporting of different quantities of things from one side of life to another. It is a lyrical work with an emotive response and, like every great work, it invites us to reflect and to think about different types of cargo and the maximum variations relating to smells the smell of iron, the smell of wood, the smell of asphalt, the smell of merchandise and many more. The cold air of steel, comparable to that of the angels on the cenotaphs, contrasts with the perfume given off by the trees, whose wood has been used for part of the sculpture Its tense and rounded for suggests an infinity of aromas according to the experience and sensibility of the spectator. We may accept that Going my way enters into us by sight and touch, but we cannot deny is olfactive pleasure. And smell is, aesthetically and physically, a very perceptive pleasure, not simply because of what it suggests of its former content, but also because of its intrinsic matter. We can change the names of things, but their perfume, their essence, does not alter; thus Shakespeare, when he tells us that “A rose by any other name would smell as sweet”. Roqué