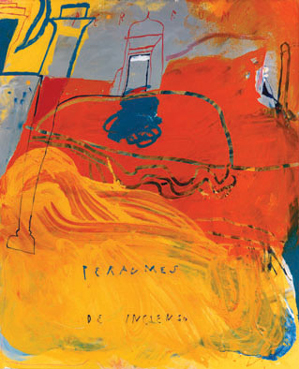 Past the silk route, beyond a thousand deserts, hills, funeral tumuli and steppes. Far beyond Pamir, Niya, Khotan. Far from the Land of Beings, inversely to Alexander, in the footsteps of Chang-kien. Hundreds of thousands of swift monsoons, of torrid stupas in the distance. Beyond Ancient Eritrea, beyond Jokand, on the Route of the Prayers to the Winds.

Over there, where the earth reddens in the sunset, where the sun hides far from the pennants and the chortens. Across a thousand seas.

There, where the sun always sets toward ‘Mecca’. Rained so many times, on the fumes of Indigo, of Mithra, of dead Turquoise: a slender plume of incense rises. It crosses San’a, it travels as so many times before the desert that borders the Red Sea. The silk smells of turquoise, of Indigo, of Mithra, of Incense, of route, of desert, of stone. It crosses Cairo and carries off everything else, continues as a wind of sand, pays blood money and takes on a green tone. It crosses all of ancient Libya. It crosses the columns, it alights on us: listen! we smell it.