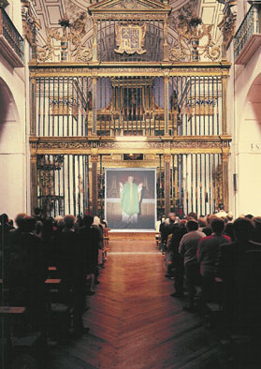 When a man who has come to be something more than a man dies, his body does not putrefy. It is as cold as any other dead body but does not rot away, it remains here, inside its casket of gleaming wood, with its gleaming apparel, its skin red and gleaming, still, as if waiting to be photographed. Thus we know it is a saint. For that reason, and because it smells good. At first it smells of incense and white smoke, a very little, hardly at all. Then the aroma becomes more intense, and then it seems to smell of something else, like soap, and that soap makes its lather of smell, and its funeral smell, which are not seen, but the air carries them and they smell more and more. First they fill the church where the coffin lies and ascend the spiral staircase of the belfry. They perfume the streets and the squares and enter into the people’s houses and everybody realizes, even in the open fields outside the city, and in the paths of the thick forest, and on the river, on the hills and on the snow-covered mountains, in the lightless caves, on the beaches and on the cliffs of the coast, that that man was something more than a man because he died with a smell of sanctity.