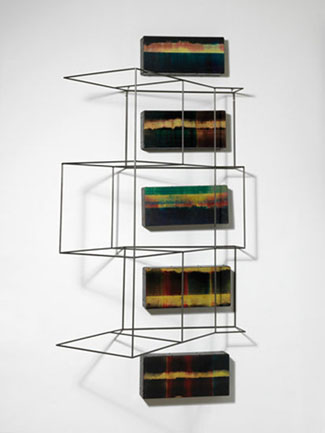 What Mother Painting 1, and ‘mother painting’ in general, smells of to me
– Strange proposition –

It has rarely occurred to me to relate painting to an aroma or a perfume. Almost never. I remember, however, a strange period, a tough period in my life, a time of transition and illnesses related to the culinary practice of art, in which the smell of turpentine, oil paint and a motley mix of fats, fruit of the imagination and the practice of subsistence living made me nauseous and have bad vibrations in my liver. My body couldn’t tolerate those essences and I had to go over to acrylic derivatives. Insipid, odourless paint, to be sure, but I managed to get a lot out of it once I acclimatized myself to its new and flavourless properties. Or at least that’s what those who really know what I’ve done with it say. I loved turpentine, not only its smell but its imaginable flavour. I would have ended up drinking turpentine, I assure you. Boyish passion inevitably drew me towards it, but my body’s contradictory metabolism put an end to one of the greatest pleasures of my early youth. Medical prescription irremediable… either that or you’ll be in a bad way for the rest of your life.
Personally, I’ve always felt painting is in a close communion with music. The story of music, of my music, is the story of my painting. Of painting… and of sculpture, of photography as well, and of all that can emerge from or enter into the depths of spirit. Not with perfume, I insist. Although… now that I get it, after turning it over and over, on account of the strange proposition that I’m caught up in at this moment, and have been for the last ten days or so, that isn’t really so much the case as I’ve been trying to make out. It must simply be that for whatever reason — ancestral neglect, lack of culture in this regard or an innate tendency towards other realms of pleasure — perhaps it’s only now that I’ve started to give it the importance it deserves. Thank heaven that there’s always someone just around the corner to help you to see — to find — what you can’t see for yourself. Or what you can’t smell.
Enrich or die; extend the enjoyment or never say another word. Art is adding: continual creation.
In this regard, then, Mother Painting is an accumulation of fragrant proposals. In the blink of an eye, see what a change!
Mother Painting is, above all, the smell of a man’s suffering, a man who unwittingly introduced me to it more than twenty years ago. Juan, a printer by trade, who had to be taken away from his Roland because he would have died of madness for it. He fell in love with the machine and wouldn’t let anyone touch it, and he did all of the shifts himself until anaemia, the disease of fatigue, confined him to bed. As a result of this, Mother Painting smells of greasy inks, lethal solvents, the same ones that kill Juan and me. Of course, it smells of reams of paper and armpits on endless summer days. Smell of industrial oil, of overheating, of graphic and bodily abuse.
Mother Painting smells of solder, of Miguel the welder, of Miguel’s belly, and his endless beer in the Quitapenas bar. Smell of iron, of stainless steel. A painting that covers over that steel, because the artist didn’t like the image of shiny steel when the work was finished.
Mother Painting is the smell of the damned patina of Hammerite, which I got it into my head to put on everything, and which will kill me if I don’t give it up like I gave up oil paint and turpentine in their day.
Mother Painting smells of dry rubbish and wet rubbish. In the summers and winters during which it took shape and made itself. Made itself, I insist. It smelled like a working-class neighbourhood and at the same time like a field. A domesticated field; a field of bricklayers: rotten bricklayers. Bastard bricklayers, ruthless little mercenaries. And like a swimming pool, and chemical products for the pool. Like a slowly made-up-for scam. Like brick on brick. Like badly laid pipes that give problems. Like an endless botched job. Like the unspeakable. Like the noble art of building besmirched by idiots.
It also smells of sunny days; of gusts of wind and rain. Of children running around Mother Painting.
It smells of dog. Of dog joy and dog misery. Of dog urine and faeces. Of dog, yes, and of dog vets. Of mange, of constant dog poisoning