tocando a Teguise I 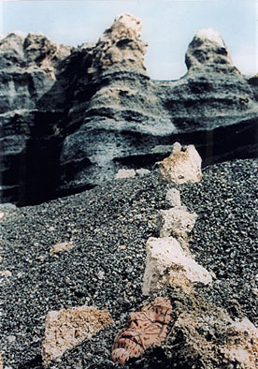 Of the many trips that I have had to make, in only two places have I found myself saying to some friend: ‘Of this smell I am made’. It happened to me for the first time as I sat on a reef on the north coast of Puerto Rico. As the reefs were exposed by the motion of each gentle wave they gave off a smell with which I identified thoroughly.
The second time that it happened to me was on my arrival on Lanzarote, in the Canary Islands. As soon as I got off the plane I perceived a delicious aroma that also made me feel complete. When I was documenting the series TOUCHING TEGUISE I, I realized that this smell came from the earth, the volcanic rocks, the sea and who knows what other ingredient.

In Puerto Rico I was able to identify the aroma of the reef thanks in part to my youthful joy when I lived on the island.
On Lanzarote, and specifically in Teguise, I realized that the Betancourt family in the New World originated from precisely that city.

On these two occasions it was a smell that gave me, or returned to me, a part of my self-identification.