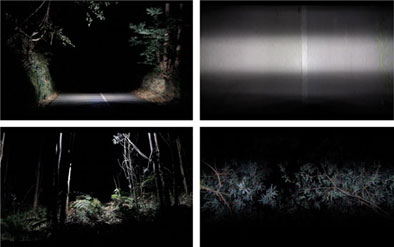 The Intangibility of Inertia

Inertia describes how the territory is not one, single and flat. At the same time, neither are memories, and their importance is marked by the sense with which they are connected. The memory of smells engages other, less common parameters in this culture of ours. The sense of smell is capable visual and aural of leaping decades in a second.

During two years of filming, the project was carried out at various locations in the Basque Country, Navarra and Cantabria. The weather meant that the sessions had to be reduced to two summers, in which we were frequently surprised by thuderstorms, and the parched earth, dried out by the eucalyptus trees, sent up a dust laden with nuances. The eucalyptus is one of the species that deplete the soil most severely, and they grow very fast. They are cut down every summer and sawmills abound in the area. Their smell impregnates whole valleys and that indescribable smell accompanied us during long nights of filming.