self-portrait of you + me (jenny agutter) 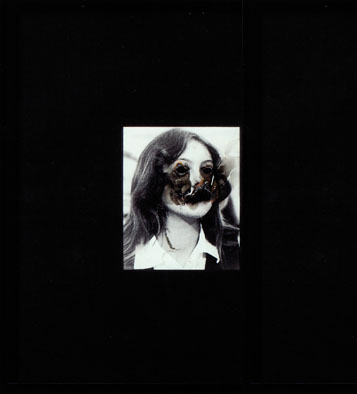 ON THE MATTER OF PRIVILEGED OR PROVOKED SENSES: THE WORK OF DOUGLAS GORDON

Some modern artists understood that the new creative processes, the so-called visual arts, could embrace not just aspects of representation or reproduction but aggressive and transgressive attitudes that instead of conserving the established dispensation led to its destruction, a radically new possible form of the ambient reality. Everything we see is real, but everything that we convert as such, to which we give new presence, is also real. This artistic option makes sense in as much as it offers real active presences that oblige us to give them content, meaning, even though it be unusual, unexpected, on occasion obliged by the new coherence that must be ordered from the senses so that what is presented is accessible to the intellect. Douglas Gordon is one of those assaulters of the immediate and of practice who makes use of time but also — as in the present case — of fire. A time or a fire that are controlled, handcuffed, that suspend their action and activity when the artist so decides, which is when he has seen to it that the observer follows him and not the original object that motivated the action.

These images thus suspended and interrupted in time in his other processes, including the aggressive, lend themselves, offer themselves to new functions. The one in the olorVisual collection goes from being an attacked photograph, for some subjective reason or aberrant sadistic game, regardless of the disfigurement achieved, to take on a new sense and meaning: the nose has been altered and at this precise moment what the image cries out for and makes manifest is the imperative of smell. We are then led to wonder — with or without the consent of the aggressor — what basic sense he wanted to dispossess the image of. That of beauty or that of smell? He has achieved both and the second to excess, making manifest the horrific and, for the arsonist, sweet smell of the fire that burns or the stinking reek of burnt meat.