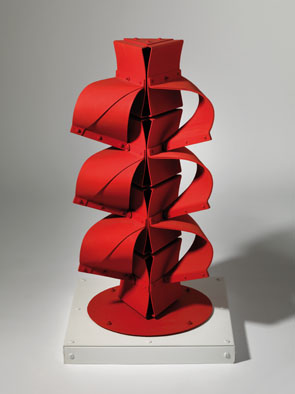 THE WATERFALL anticipates the thematic concept (but not the sculptural treatment) of the slightly later and much more complex cascades and knottings: Augustinian Landscape, 1989. Both pieces, in effect, allude to a natural phenomenon —albeit with significant mythical-symbolic overtones— that is characteristic of the region of San Agustín: the smell of the many cataracts that fall from a great height, almost entirely screened by the luxuriant tropical vegetation of that part of the Andes, and intuited only by their strong smell of wet earth, of wet chlorophyll, of water and oxygen. The mythical connotation comes from the fact that for the pre-Columbian inhabitants of the region, water is a symbol of death and transience, as are the serpent and the moon. The artist has attempted to signify with this mechanical cascade the strange symbiosis between nature and myth that the native peoples perceived in those mysterious falls of water that, majestically, olfactively impregnated the memory of the place.