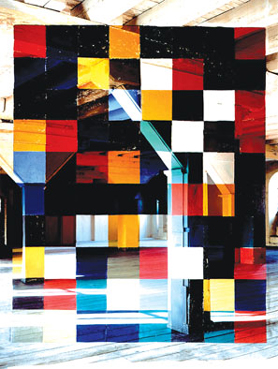 In this place in Metz, the first impression on opening the door was that of discovering a chaos resulting from the vandalism that follows on the abandonment of any place successively occupied by young people in search of sensations or pleasures, places such as those that exist in the centre of every city, the refuge of vagabonds, where they end up closing all the entrances, leaning only an opening for the cats that prowl in great numbers in the neighbouring parks.
When the chains were torn off the door that blocked the way, the cold and the damp made you shiver. There is a general smell of furniture and partitions smashed up and scattered by kids playing and by vandalism, which send up dust.
And this, impregnated with the urine of the cats and of passing humans, surprises the visitor. In abandoned factories, the Place is usually full of smells, sometimes of cold metal, sometimes of grease, and the first act that And have to carry out in order to ‘inhabit’ my places is to clean and tidy up the empty room so it can receive the action and the painting.
The ‘opening-up’ with light and action modifies day by day the engagenment with this place.
The work, once completed, means that under the action Time is reaffirmed in this new past, which, now coloured, is impregnated with those same smells, and the image selects and abandons this so very human aspect of the place.