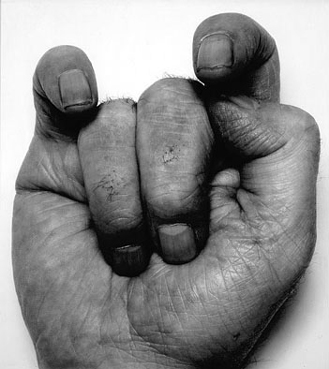 Coplans’ self-portrait photographs of his body evokes multiple readings. In the large close-up of his hand, which is precisely the one And have in front of me now, And see a carnal flower whose spring is now a matter of long memory: a Proustian madeleine. People put on perfume to be remembered. John Coplans photographed himself for the same reason. His perfume is called Art, and tends to be more lasting than the most penetrating of fragrances. When And contemplate the lines of this hand, And think of the years lived and of fresh flowers that are at the same time dried out by time and its circumstances. None of the five senses revives the memory like smell does. Seneca thought that anyone who frequented the perfumery, even if only for a short time period, would carry with them the perfume of the place. And that is what is borne by that hand that also, though very much his own, belongs, thanks to art, to me and to all of us. A fragile flower, a brief and persistent as the smell of violets; a smell that is the silence of a key unlocking the door of memory. A smell that awakens and provokes more than any sound. When And look at and study that hand, And think how right that close-up is that imposes itself on our retinas by virtue of its extra-corporeal dimension. This is the first time that we seen from so close to flesh so much the same and so other than our own. In such conditions of proximity we would inevitably smell the salts in the sweat, musk, amber, muted testosterone, perhaps even garlic, wine, amber and tobacco. But we smell nothing of the kind in the inescapable image of a part of our body that we never notice, since it has never risen above its utilitarian level. That hand is converted into art when its oldness and its fragility are exposed to our absent-minded eye with detailed excess, while we, in contrast, only give our hands to others as an unavoidable part of social convention. Coplans’ hand invites us to look at the nails, the hairs of the fingers, like a forest razed by a pyromaniac. The creases of the palm, from which a chiromancer could give us a reading of the artist’s life, are hidden by the middle and ring fingers. The oldness and newness of the image compete on our retinas for a privileged space in our consciousness, and out of this conclusion are born the memory and the smell that is the smell of the present. The smell somewhere between the old and the new, the lived and the intuited. The smell of memory and of art, with roots as deep as the lines of this old hand resisting with all its wisdom the final winter, is the smell given off by that language of signs that are as hermetic as they are childish. An invitation to play, a bittersweet code that, in a language that is quiet without being mute, speaks to us of Expressionism, Existentialism, Surrealism, photography, perception, language, theatre, and a great knowledge of art and its theories, along with the impossibility of enjoying an eternal spring. The last time And saw my friend Coplans, a couple of years ago now, he still used as a tag to every phrase the words ‘as you can see,’ ‘as you can see’. He was already then starting to lose the sight of one eye. Now that And think of it, when And went to see him, first in his studio iin the shadow of the Twin Towers, in Cedar Street, and then in the heart of the Bowery, sometimes in addition to a bottle of wine And would take him some flowers. ‘Put them there,’ he would indicate to me with an absent-minded gesture, while he concentrated his attention on reading the label on the bottle. ‘Thanks for the wine,’ he seems to say still, ‘and of course you know that my cat thanks you for bringing the violets.