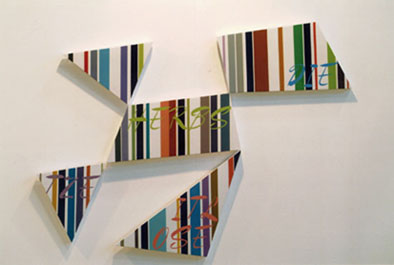 Kurt Schwitters gave the title Die Herbstzeitlose (more or less, ‘those who have no autumn’) to a sculpture he made between 1926 and 1929. In using this enunciation in my piece I have tried to retain that scent of melancholy, that sense of something that has disappeared. Painted things always allude to what has ceased to be and as such give off an unquestionable smell of absence and evoke what has been lost.

However, by appropriating other artists’ titles we also take possession of the particular history and circumstances surrounding the other, and as a result my particular piece not only refers by way of its chromatic variations and the forced breaks between the different sections involved in the installation of the work to the stimulating catharsis that the historic avant-gardes devised to explode the conventions that govern the world, but also evokes Schwitters’ painful personal circumstances when, hounded by the Nazis, he ended up taking refuge on the Norwegian island of Hjertøya where , cut off from his family, he survived by painting landscapes to sell to tourists.