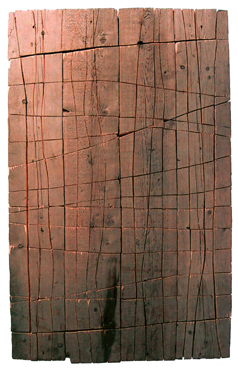 4711 is the number that was assigned to the eau de cologne factory on the Glockengasse in Cologne, Germany, during the Napoleonic occupation and then became a brand name, as if it were a perfume of the French Revolution.

Well, until just a few years ago the warehouse and distribution department of the cologne factory was across the street from my studio in Cologne, on Thebäerstrasse, and I salvaged the debris of those stores had a load of planks and beams from the rubbish outside the warehouse so as to work them up into sculptures. I gave the security man there, a Pole, a small wooden bas-relief with the emblem of justice. In return he gave me a box of nails and a box of radial discs and let me take the wood. The basement where I kept the briquettes for the stove ended up full of planks and beams. The basement and the stoves gave off that sour damp smell that permeated our clothes, our cupboards, the whole house, and that we can still smell, even though we now have gas heating. Ten years have passed since I made that deal with my Polish friend, and last autumn (2001) got four planks from the basement and cut them into pieces with a hacksaw. Then I put all of the bits back together and here they are, in this sculpture.