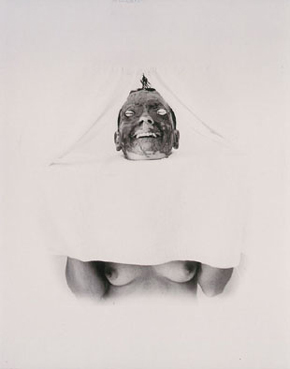 The references to witchcraft or religion that Marta María Pérez Bravo retains and photographs offer themselves as an interpretation of the original condition of the human being. These are actions motivated and governed by a belief in the communication and transformation of beings and objects. Their images represent different rituals intended to rescue from oblivion and preserve the continuity of a magic world she does not wish to see lost. We are shown scenes in which talismans are combined with amulets and magic symbols that speak to us of the energy that animates life.

In this photograph she takes the human being as her centre: we observe actions that might be situated in that interstitial space that exists between the thought and the sensation, concretized in that constant presence-absence of the human face. We are denied the vision of that which would offer us most information about her: her face. She speaks to us of her beliefs, her fears, her dreams and her feelings, using her own body to let the spectator feel, see and smell what is normally not seen.

The face makes reference to presence, which is intended to underline the identity of the individual, her smell, her flavour, her… It is the place where all of the play of metaphors takes place. Its smell takes us into a morass of conflicts, symptoms and anxieties, the space in which all our needs are made visible, where the subject is made vulnerable and exposes all its fragility. Its trace makes reference to loss, to personal disappearance.