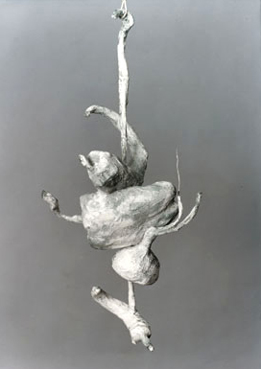 Still-life that reeks of life In relation to those artists who create the new world of art- the so-called impulse of the present -on the basis of odourless artificial technologies and fantastical imaginaries, Barceló does so “in the same way”. That is, according to the specific manner of the Catalan contribution to the universal. In this he is like Miró (and even the early Dalí), like Tàpies and Brossa, or amongst those of his own generation, Amat and Perejaume, all them advancing towards the future while traveling back to the oginal roots of the human: so we have rottenness, a fascination for the primitive, linguistic correspondences and simple rituals, a poor poetics of the object, crossroads of civilizations, lyrical illumination, ethical timelessness, comic nihilism, a break with the norm; in short, a universal and highly personal invention constituted of the highest value of difference. The genius of Barceló, like that of these others, asks to be explained in terms of the artistic quality of those who dig down to draw up the force of the immensity of nothingness in order to raise it up to the heights of absolute. His intellectual constancy, like that of these others, emerges from the ethical radicalism of art life. Distancing themselves from analytical and linguistic minimization and, at the same time, from rhetorical and narrative excesses, they implode the spiritual tension in the genre. Because it is in the identity that in the dark illuminates the darkness of clarity. At the domestic extreme, art of the depths and as such not urban, they thus displace even geographical mythologies towards extemporaneous sites of the contemporary, and in spite of this communicational celebrated, their triumph celebrates the teIluric, organic center where they rot with a tenacious will to exception. Barceló magnificent sculpture speaks of more than it says, and in consequence is my aim to note he some here some of these tensions we referred to above, inherent in “the same way”. The classic theme of the still becomes internally subject rather than genre, hence the choice of poor tubers in opposition to the bourgeois rhetoric of succulent fruits. The opacity of the abstract white on top of the rust known as the latent repose of biological disembarrassed of vital variegations. The roughness of the material expresses its struggle for interiorization in the face of the neutrality.
Vicenç Altaió