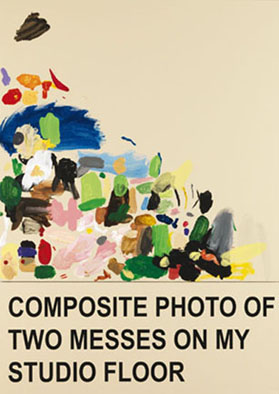 COMPOSITE PHOTO OF TWO MESSES ON MY STUDIO FLOOR

The colours of tubes of paint have for centuries had fragrant names given to them when the world was much bigger than it is now and every destination evoked the mystery and magic of travel.
Intense smells and exotic colours came out to meet the sailors who coasted the Persian Gulf to get to Iran where they found Persian red, or even further, to the far-off Indian Ocean, where rare aromas hatched, sighting the coast from whence came Bengal pink.

Travellers from England took the Grand Tour to espy Naples yellow from the Mediterranean, or coasted the Baltic Sea to find Prussian green. To the east they found Warsaw brown, and on reaching Austria found Vienna grey. In the west of Europe, meanwhile, orange was Dutch, and blue always Sèvres.
However, they never gave any colour the name of Barcelona, which may be why someone had to bring here aromatic colours impregnated with other places.
What is not easy to determine is how Shrigley and Monk came up with the idea of creating together the Corroborative Paintings series.
That said, certain colloquial turns in the result suggest that there may be a rapport here that goes back a long way. The fact is that they met in Barcelona one warm September and filled the aseptic space an art gallery with all of the smells that the names of the pigments evoked. They told me that the work Composite Photo of Two Messes on my Studio Floor was the palette on which they mixed all of the colours that flooded the exhibition with a wealth of aromas.