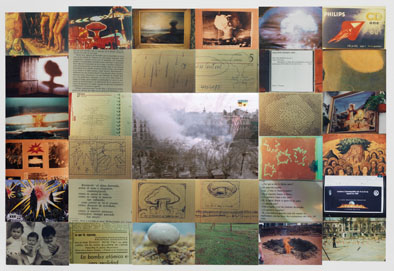 ‘If all things turned to smoke, the nose would be the discerning organ.’
Heraclitus

Things are distinguished by their smell. This is a classic response when it comes to resolving the polemic of ‘pictura ut poesis’. Smell makes them real. Artifice is nothing but a mechanism in pursuit of that smell. The deception works when it arouses the nose.
Love, courtly love, comes from the same debate. While painting and poetry seek to possess the reality, that erotic ghost, the real presence of the smell of the loved one is heightened precisely by their absence. Solutions with which Renaissance aesthetics laid the foundations of the Baroque: since it is love that moves reality, we should ‘marry’ the arts: music and poetry, drawing and poetics, etc.
When I proposed to take the mascletà firecracker extravaganza as a narrative model for drawing up a balance, autobiography, review of the things I had been doing in the world, artistic operations, experiences and so on, I knew I would have to add all sorts of documentary information: texts, photographs, sounds, videos, etc. The direct experience was missing.
I have seen the mascletàs broadcast on television, heard them commented on the radio and in real time on the Internet, but these representations all lacked the sense of smell, an intense stench of gunpowder.
At times the memory of the ear-splitting noise of the mascletàs brings the smell of gunpowder back to me.
Just as courtly love was sublimated as ‘smell’ in Cavalcanti’s poetry, those Baroque marriages renewed it by summing energies: in the long romance there appeared, for a moment, enjambed among the infinite sum of verses, the memory and smell of the loved one. Even as a caricature: the stink of love.
A synaesthesia caused by the vertigo of the senses, by the merciless sum of musical rhymes, the alliteration, the word play, the punning of the concepts. Synaesthesia seems to be the explanation that critics and scientists give for that rapture of smell experienced by the reader’s body, pragmatic datum of the triumph of the poem.
In its modest way, this was how the representation that I outlined was meant to work; the accumulation of images, quotations, data, photographs, signs, videos, cassettes, sounds, texts, colours, forms, ideas, associations, games and so on would suddenly unleash the smell of gunpowder, the aroma of childhood. That was the idea, to propose a room, a laboratory in which the spectators would be imbued, would get to know and, carried away by that knowledge, be infused with a smell —of their life, of their world— evoked by the way fragments of a biography, studies of the works of art, readings of life were associated in the pieces. The gunpowder smell of childhood.