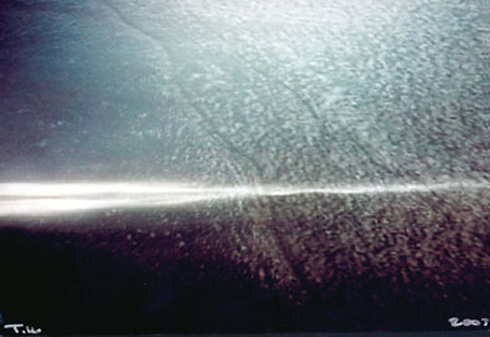 The music utilized in this video gives a feeling of a nature, movement, breeze of fresh air –another words –new experiences. At the beginning, starting with the images of the infinite waiting halls of an airport in can be substituted by a smell of running cars, trolleys, smell of mashinery, some sumells of a cooking food –another words –all traces of civilization that can be felt by regular way in everyday life. Since the concept of the film is based on juxtaposition of reality and imagination, next part of a sense attributed is described as nature specific smells, vibrations –again like breeze of ocena water, vibration of ocean waves hitting a shore, smell of greenery. The film presents two majors parts of a nature –air & water. As you navigate through the film, changing from one state to another (from ocean to sky, air & back) the corresponding senses are changing from calm & tranquility to vibration, feeling of a strong wind & senses of earth. Feeling of air can be substituted by absence of sounds and excess of oygen, fresh air. The whole film is a movement, bouncing beween calm & quite & smells & movement. Tim White-Sobieski