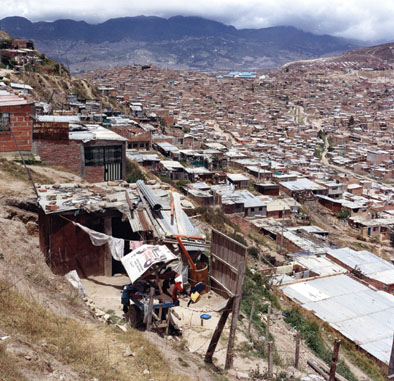 Colombia occupies third place in the world ranking of countries with the greatest number of people displaced by violence, after Sudan and the Democratic Republic of the Congo.

According to government estimates, there are two million internally displaced persons in Colombia, although NGOs believe that the figure may be closer to 3.5 million people.

Every day, thousands of people in the rural areas of the country flee violence, looting and persecution by guerrillas, but, above all, by paramilitaries or by the army itself, and move to the relative safety of Bogotá, in search of the protection that comes from anonymity among the masses.

Altos de Cazucá is a group of neighbourhoods in the south of Bogotá that contains tens of thousands of internally displaced people.

La Isla and El Oasis are two of these neighbourhoods.

Most people cannot return to the homes they were forced to abandon, plundered by their victimizers, but at the same time they find it difficult to integrate into the big city, precisely because of their condition as displaced persons.

The lack of opportunities makes young people easy prey for forced recruitment by the AUC (Autodefensas Unidas de Colombia or United Self-Defense Forces of Colombia, a right-wing paramilitary group tolerated by the government), which is massively present in the peripheral neighbourhoods.

The large sums of money paid by the AUC, particularly to recruiters or informers, are very tempting.

But many people simply have no alternative: forced recruitment targets unemployed young men. They are accused of roaming the streets, of supporting the leftist guerrillas or simply of being leftists, and those who refuse to join up are brutally murdered.

It seems that the conflict is following its victims.

On 11 May 2005, between 7.30 and 8 p.m., five heavily armed men went from house to house with lists in their hands asking for young men by name. In the El Oasis neighbourhood in Los Altos de Cazucá, three teenage boys were forced to lie face-down in the middle of the street and then each one was shot in the head. Michael Arranda, aged 14, and Omar Erminso Hernández, 16, were killed instantly, and Javier Vargas, 19, was mortally wounded. In other neighbourhoods of Los Altos de Cazucá, murders and disappearances were also reported, and residents speak of more than fifteen youths and minors killed in a weekend.

These murders are part of a campaign of social terror that is accompanied by threats written on the walls of Los Altos de Cazucá that say: “put your children to bed early or we will put them to sleep”.

On Saturdays at noon, when the main street of the neighbourhood of La Isla is full of children playing, men talking and women doing the weekly shopping of vegetables and rice, a score of young Afro-Colombians gather in front of the big green house of culture that an organization for displaced Afro-Colombians built thanks to a donation. (1)

(1) Excerpt from YOUTH IN THE URBAN CONFLICT. Violence, social control and cultural initiative in the Altos de Cazucá by Kirstina Westh Jensen, published by www.pcslatin.org