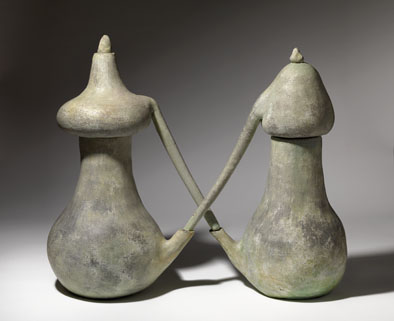 Some archaeologist found a graffito on the wall of a house during an excavation which, once it had been translated, said the following: Women smell of fish, men smell of meat.

We not aware of this when we are preparing an exhibition entitled Chthonic Apollonian, a refection the feminine-masculine, and it seemed to us that that graffito illustrated another aspect of the subject which we were interested in.

The influence of smells in sexuality and seduction is well known. A number of recent studies have demonstrated how smells can be a negative influence in courting or, on the contrary, unleash irresistible desires.

So we felt justified in using forms suggestive of stills -one fuller and the other more pointed- to symbolize the couple and the concept of smell, with their probosciness crossed and inserted on the other’s orifice. On the upper part of one there is a fish, an on the other a piece of meat. In this way, the visitors could participate olfactively in the exhibition.

The title Fish or Fowl is an English expression which implies a contrast between two opposites.