we can change the world III 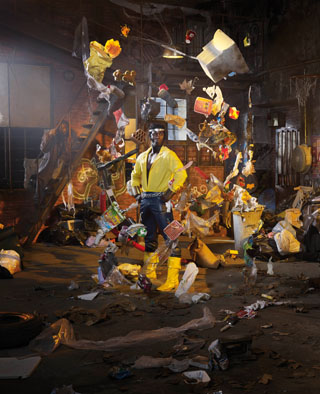 LUKE CAGE AND HIS MEMORIES OF OLD PAPER

I am talking about many years ago, in the late seventies, when my brother and I would wait every for our mother outside the school where at that time she still taught.

Then all three of us would go home, unless it was Thursday when there was a market and she used to stroll around with her two kids. In general, the atmosphere that was generated around those stalls full of ugly clothes struck me even then as hideous, despite the fact that my father, a landscape and genre painter with a local focus but a Frenchified touch, as they used to say of him, had naively depicted it time and again in pictures daubed with nervous little brushstrokes. As I say, none of those stalls managed to engage the interest of the sleepwalking, fantasizing boy that I was; none but one: the second-hand books and magazines stall. But unfortunately for me, and as was to be expected, that old paper stall was the one my mother found least appealing. First, because once I had stopped in front of it I tended to linger, and as she used to remind me, it was late and we had things to do. And second, because my mother was of the opinion that all those old books and comics, which I found so fascinating, had belonged to people who spent long periods in bed, which presupposed a medical history of the most sinister kind: people on whose death or — lets be kind — recovery had made it urgently necessary to get rid of the tons of useless paper they had accumulated during their illness.

In many cases, that pile of old papers, rough to the touch and giving off that characteristic smell, as if it were the pagan recreation of an ancient library, accommodating all kinds of sordidness and marginal heroes under the category of adult entertainment, concealed discontinued back numbers of that comic we used to buy from the kiosk at the fair along with the newspaper after mass on Sundays. Whether for reasons of hygiene or for their value, the pages of those copies of Luke Cage or Satana that I thought I would never have the chance to see or smell again had to be turned with tweezers.

(Written about We Can Change The World III (2009), which features a representation of the 1970s American superhero Luke Cage in the midst of a tornado of trash.)

Camping in a smelly place.

As if in a Cadinot film, six kids rest on the grass by a lake. Trousers covered in stains and socks half soaked with sweat. Games of greasy pole and at midday a game of tag.

– This is where the bogeyman lives, says one who has just arrived.

– We could stay. If he sees our father’s beard, he will be frightened.

– Look at the state of us. Go over to the water and you’ll see your reflections. We need to decide who will comb their hair first.

With perfumed clothes and the afternoon ahead of us, we discovered inside a pile of shit the shell of an old friend.