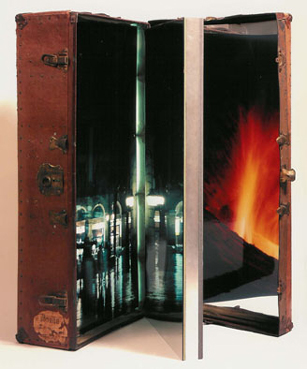 Fire as what emerges from the process of becoming and disappearing.

In the movement of the gaze through the places of the city the images are stored away in the passages of the memory, until a fire sparked off by the smell of the streets of the city (Barcelona) inundates the image I am observing and this image is reflected in the flames and the recollection burns in my memory. 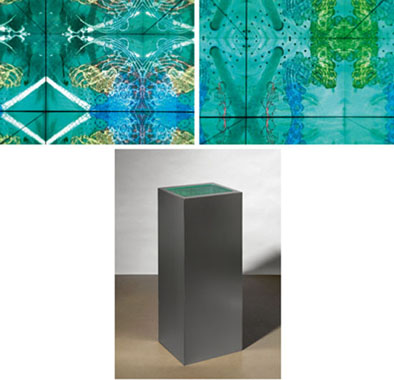 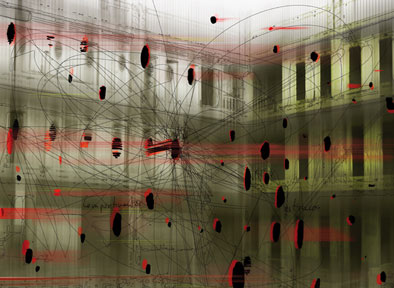 “If the recognition of a scent is more privileged to provide consolation than any other recollection, this may be so because it deeply drugs the sense of time.”
W. Benjamin (Iluminaciones, Ensayos y Reflexiones)

Aromas of sea and human throng accumulate in closed compartments. This work full of force and melancholy stops time and transports us to the ruins of the Banys de Sant Sebastià, a seawater spa in the Barceloneta district that no longer exists. 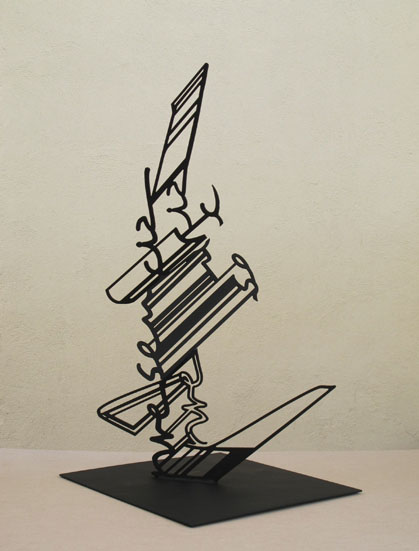 In an interview with Stefano Gualdi, Chema Alvargonzález remarked that ‘the word, like architecture, is the reflection of the collective state of the human being’.† It is not surprising, then, that his words (in iron, light, video, photo…) should be erected as constructions whose forms – beyond the visual limitations that the materials confer on us – conceal a language of their own, whose unlimited versatility offers the viewer, whatever his or perception may be, the possibility of extracting from them the facet with which they most empathize, bringing out their most authentic side.

Presence was conceived as a tribute to the memory of Inés de Suárez, who broke with the conventions of her time and left from her native Plasencia to sail to the Americas.

Over and above her exploits as a conquistador, what the piece picks up on is the intensity with which Inés de Suárez lived and grasped the reins of her destiny, leaving for posterity the trace of a unique personality.

In this way, Presence encloses in its graphology a story – like that of Inés – as wide and intangible as the nuances of our senses, confined in a body of iron. Even so, Presence, as a conscious entity of a universal nature, shrugs off this vast skin that keeps it stagnant with the intention of fulfilling the task of any word of similar scope: to be perpetual. For this reason it strives to escape, in a continuous movement that is revealed in it through an evident ‘dance-cum-fight’ between signified and signifier, matter and idea, which physically deconstructs it before our eyes. A dichotomy whose equilibrium lies in the formal expression of the work and everything that derives from it: the weight of the material, of the air it transpires, the light that emanates from it and with it the shadow, whose transmutable property allows the body to take on innumerable tones, moods and messages, so that it possesses space-time; presented in this way are all those ethereal registers that seem to vanish in the air, but which actually lie dormant, always attentive, in the most recondite part of our memory and make themselves present, whether by treachery or good fortune, before the most insignificant and unsuspected element.

In this case, the weight of the light and the shape of its shadow, the colour, the texture of the surface on which it is projected, the aroma given off by the dust contained in the air mixed with other individuals around us… aromas, colours, textures… can strike with a sting in the middle of our chest in the form of a memory or like a little light shining in our spine, and it’s then that the words come into play and start to sprout to allow us a credible reconstruction of our experiences from their intangibility, demonstrating that presences, like aromas, are in continuous circulation around us.