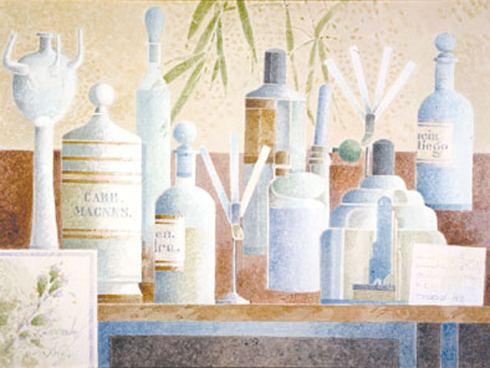 When I was commissioned to do this picture, what it spoke to me of was not so much perfume as the elements of the perfumier; in other words, they brought to my studio the objects —flasks, filters, bottles of different formats— to do a still-life with all these models.

In general my pictures are, in the first instance, a distribution-ordering on a plane surface of objects of an almost geometrical form, with a balancing of the different planes, a compensation of spaces, as a framework for the picture; the colours, plain, transparent, delicate, without stridency, playing with tones that are harmonious and not too defined. It is also worth adding that I try to say things in a poetic way, and at the same time with irony.

In this painting, and apart from everything I have just said, we see several other things, such as, for example, a box in the foreground that represents a plant from which the essence that is the base of the perfumes is extracted; in the upper part we also see some leaves of a tender green to give the sensation of freshness, and on the right another box, with a magical formula, for elaborating an eau de cologne that will give us a first touch of freshness and, for the evening, that perfume that seduces.

As well as the bottles, one of them with essence of ‘Lavender’, we see a bottle of eau de cologne, ‘Maderas de Oriente’, a very clear evocation of the 1930s, of my childhood and of the Cubist style.

Everything is enveloped in a golden atmosphere that gives it the air of time, the time necessary for the patient elaboration of the perfume.