the lily and the leopard 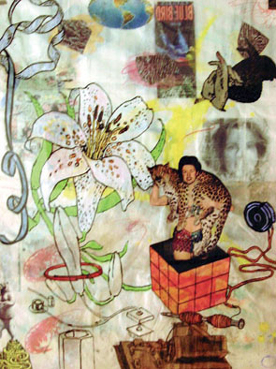 The real subject of these drawings is not lilies or leopards but rather the experience of consciousness. That is, what it feels like to be human inside the thinking and sensing human mind, an experience that ricochets back and forth between discovering likenesses, rhymes, consonances, parallels, and similarities and leaping far afield.

Even when the mind leaps from something to something else seemingly unrelated, I suspect there is some consonance, some connection to explain why that leap, why not another one. Often times, for exmaple, the brain is triggered by sounds or smells as well as thoughts or ideas.
Smells, in particular, seem to have a deep connection to memory and the processes of association. Lilies are among the smelliest of flowers and so the deep-throated lily here is a kind of metaphor for the drinking in of smell and its relation to the linkages of consciousness. Contemporary research on the brain seems to be proving that the term “free-association”, which the surrealists used, may be a little dated — that things are, in fact triggered.

For example, the leopard’s spots are like the lily’s spots, and the two live by smell.

Somewhat like the way the bear balances on the pyramid.

I mean physical connections like you would see in a homemade electrical battery but also see this wired linkage of coneections in the brain. It’s a kind of flow chart of images, a thinking and sensing diagram.

Softly behind on the right is the artist watching the drawing form behind.

As you look a these images and speculate about connections between them as well as feel your own associations coming to consciousness, I think you have a heightened sense of your own mechanisms of seeing and thinking and sensing.