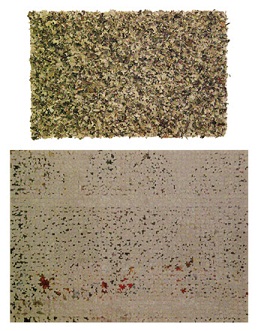 The jigsaw puzzles I use in this series are reproductions of famous European paintings of the last five hundred years. Thery smell of cardboard, of the factory, of standardized processes. The artistic reference they bear on the surface is an excuse for something else.

To some extent, this something else is evident in every sphere of human activity, but its capacity to corrupt in the realm of artistic production has interested me for quite  some time. It generates both distrust and fascination, because this corruption is also a rusting process.

What does this process smell of?
Does faith … rust? What is the smell of faith?
To peel a jigsaw puzzle is the symbolic act of stripping things of their image. I use this particular series because in old painting we find the numen of the role the image plays today in our perception of reality. Permitted or celebrated images cover up as much as or more than they reveal. The paradox lies in the fact that the elimination of every trace of image produces a new image. This happened in the stripping off of the jigsaw puzzles, so I collected their detritus, compacted them and called them entropies. I was interested in the possibility of constructing an image using everything that can be discarded. A symbolic and failed attempt to create uncovered images.

These pieces are therefore the result of the loss of faith in the history of art, a spent faith that in spite of everything resists the smell of chloroform.