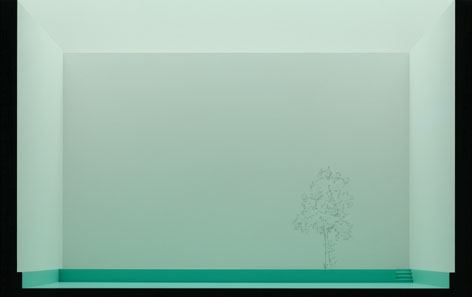 My relationship with smell is somewhat ambivalent. On the one hand, my olfactory perception does not have the same degree of sensitivity as my visual perception. It is as if, in order to perceive any smell, it had to pass through my bodily atmosphere, just as the terrestrial atmosphere filters the sun’s rays. So, then, I suppose that my limited sense of smell, as if it were a sky full of dust particles, would perceive everything with an orangey tone of dusk. On the other hand, though, in the olfactory range at my disposal, when the reptilian part of my brain perceives a small trace it could instantly transport me to places, bodies and memories with an abrupt intensity. All that is needed is an allusion and it could carry me off to a mountainside with bushes recently refreshed by a spring shower, to a damp English kitchen, to a stairwell filled with the smell of a neighbour’s cooking or, of course, to the body of a loved one.

When I think about Space for 9 with Lime Tree I end up doubting what smell I would relate it to – actually, I will have to wait for spring to come to remind me what a lime tree smells like; it must be lost in my memory, or perhaps it is too subtle for my atmosphere and I really have to rub my nose against the leaves, the way a bear scratches its back against the trunk of a tree.

According to one of the series of the pasturing of the ox, after the pastor arrives at awakening in the eighth sequence, in the ninth stage, having returned from ecstasy, some flowering branches appear, indicating that the perception has become more crystalline and true: ‘Blue flow the streams, green rise the mountains.’ What would the pastor perceive, now free of atmospheric inclemencies, in this space? What would he see? How great an extension would that vision encompass, and bathed with what light would he contemplate it?
And, of course: What would he smell? What smell can that extension have?

The visual metaphor offers us a horizontal turquoise space – or is it water? – with access to a higher space in which a lime tree would appear in dialogue with the void and bathed in light; and all of this, except for the light, is made present to us framed by dark bands.
What odorous dialogue would be established? Or would it be a monologue of the lime tree?
Could you smell the light? And if so, what fragrance would it have?
And would someone with that activated sensitivity also smell space?
Would they smell the colours? What does turquoise smell like?