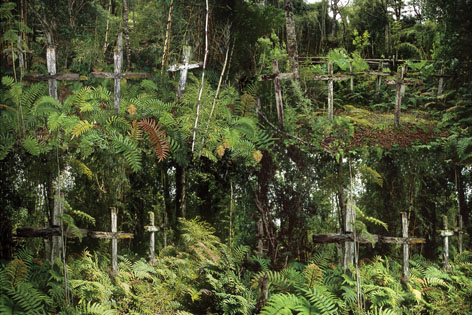 Isle of the Dead corresponds to an island, Isla de los Muertos, that is located in the Tortel Commune, Capitán Prat Province, Aysén Region. It was transformed into a cemetery by a hundred of deaths that occurred there, the cause of which remains unknown to this day, and became a National Monument of Chile and the inspiration for thousands of superstitious, poetic and historical stories. Beautiful frame of cold forest in a setting of superb landscape of mountain ranges and glaciers, which, apart from the value it has in its own right, enhances still more the mystery of what took place there.

The constant rain and wind in Patagonia make the souls of the dead rise up in the smell of the earth… and the tongue with mould, like a submerged bell tower.

Isle of the Dead is an image that belongs to the Austral project on the region of Aysén, the South of the earth, the South of Chile; the XI Región General Carlos Ibáñez del Campo.

Isle of the Dead reflects and revives the atmosphere of death and mould, of cold virgin forest, of cypress and fern that envelops everything in a penetrating sweet smell, truly unforgettable. It represents a kind of journey within a limit, constrained, without moving from there, travelling through memory and the experience of limits. It invites you to be inside the landscape, travelling in it, experiencing the movement, the changes and the opposite side of reality. Perceiving the other side, making our imaginary position change and modify itself completely.