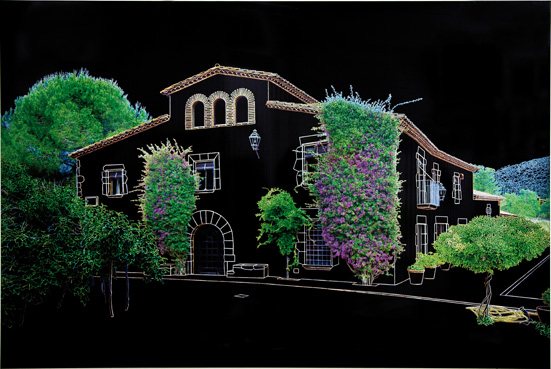 The first time I heard about colección olorVISUAL, I was filled with curiosity, partly because it was such a singular premise for putting together a collection, but also because I had been told that the idea of ​​smell present in the works was far from evident and that they originated in the special relationship that Ernesto, the collector, has with this sense, given his profession as a perfumer.

When I started to look for models of different architectures to expand the series of black paintings I had been making of museums, I was given the opportunity to get to know a beautiful Catalan farmhouse.

It is true that the impulse that led me to carry out this work is closely linked to its condition as construction, not only that of its historical model but also on account of its very particular perspective, and also for the dialogue between the rational intelligence of the architectural lines in contrast to the organic order of nature. But during the process of painting the work I could not stop thinking about what odorous links would be made with the work: would it be the shiny black material that covers almost all of the work? Would it be those little strips of photograph that make up the drawing of the house and its gardens? Or even, could it be that, this being a work that to a certain extent seeks the essence of the represented image, we might get to thinking of a primitive smell that would recover the experiences lived in this space?

I think that those questions can only be answered by the viewer.