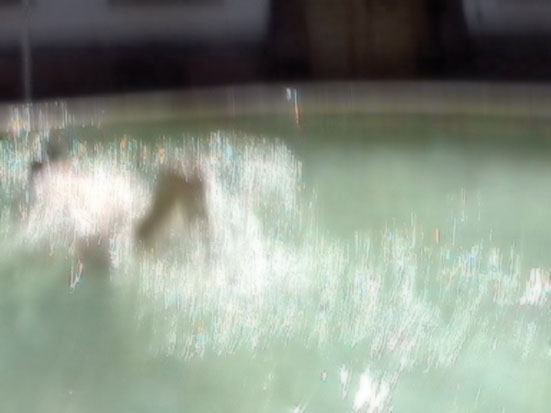 The act of bathing literally involves submitting the body to the influence of a physical agent that produces an immediate effect on it. Perhaps the most obvious is that of tempering our temperature, an effect that produces an instant relaxation on the boundary between the psychic and the somatic. Such a sensation relaxes us and, nevertheless, sharpens a clearer state of consciousness that brings us closer to the famous eureka effect, as when Archimedes arrived at the solution of the measurement of irregular volumes while submerged, feeling the lightness of his body in the water. It could be inferred that the relaxation of the senses is directly proportional to the increase of sagacity in discovering and understanding what is disguised or concealed in reality, a question that also concerns us artists, because what else is our obsession, which pushes us into an infinite process of investigation whose residue, the works, are barely the tip of the iceberg?

The photographic image Bather has its intrahistory, that of a bathe in the city of Basel. It was an intensely hot and humid day in June, one of those that make you faint. A group of us were walking down from the Kunstmuseum towards the river and at a crossroads we met some children bathing in a public fountain. Being neither stupid nor lazy, we stripped off our mature years and our clothes and immersed ourselves in that singular improvised frigidarium. The children looked on in wonder at our aquatic games: with all the plunging and splashing, the happiness of the moment overcame our inhibitions and we raised quite a rumpus with some aquatic scenes that were recorded on my video camera. Months later, going over the images, I found the frame that ended up being translated into the photographic image of Bather, which appeared as an illumination, independent of the other frames: it was a caesura in the evolution of what was happening. The optics of the camera and the quality of the video resolution itself combined to convert a splash of water into a luminous gesture and the saturated colours and the blurring of the motive contributed to the image acquiring a presence that went beyond what it represented.

After our bathe we went down to the bank of the Rhine for a cold drink and a snooze. With my eyes closed, I felt the sun on my eyelids like an orange chiaroscuro. FAs I dozed, I fell into a dream that once again immersed me in the water of the fountain, which was now much larger; I dived and dived, and suddenly everything changed in such a way that I saw myself as a foetus in the womb. I do not remember much more of that than a profound and limitless gloom, and a powerful olfactory sensation: the intense scent of lilies of the amniotic fluid. When I woke up there were no flowers around, but the feeling of the smell of lilies remained. My sense of smell diminished, however, as my other senses awoke. I took pleasure in the passing of the freighters and the sound of the city, and finally I returned to the world.