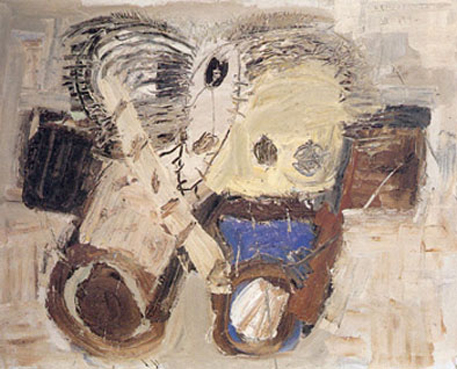 Subtitle: ‘The Dance of the Senses’

The human face is a fundamental generic image, recurrent in my work. It is the place where the state of mind is formed with its infinite fluctuations and where the principal tools of perceiving and creating communication with the world around us are located. It is the seat of sight, of hearing, of taste and of smell.
I use the face as a manipulable object that favours the pictorial transformation: distortion, fragmentation, expansion… It is the starting point for a construction that grows asymptotically to a culmination.
It is the picture space, where the sense organs are liberated from gravity, and agitated as if they were out in the open. A few demolitions and the pieces of the puzzle fluctuate between the abstract and the real. The ears are given right angles and the eye for their partner and become the principal axis of the new layout. The mouth traverses the zone obliquely and the nostrils are multiplied. A kind of dialogue is established, in which the pieces play in their autonomy, in their discoveries and in their interaction. A baroque space has been created in which the forms have lost their descriptive quality, have been made suggestive and assemble at this point in the volatile character of olfactive sensations. 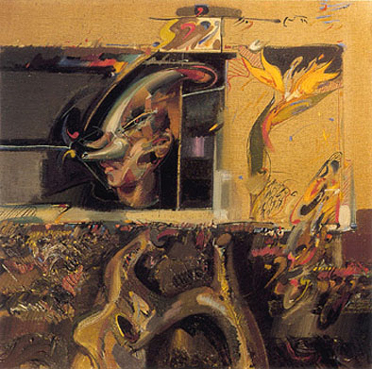 A preconceived idea conditions the development of the work and draws a strict scenography that reduces the margin for improvisation. Three windows structure the square space. Organized in a collage, each of the successive planes includes in its centre a protagonist. The juxtaposition of the scenes through which the eye travels thus transmits a fragmented discourse. The meaning of the work lies in the interrelation that is established between the three images that compose it.
In the base that extends the entire width of the canvas, the organic plant body in which the roots are seen to be intertwined is presented in its brute state. The dark colours and the loaded brushstrokes invoke the world of smells in their origin. The compact substratum opens a breach into the upper zone, in which two sharp forms are installed, each lodged in its respective window, with a curtain of light or shadow. The hidden face tries to forge a different identity for itself. The simulation is part of the game of seduction. From the penumbra the mask opposes its olfactory tubes to the spiky silhouette of a flower whose form stands out from the background of virgin canvas. The effect of contrast emerges between the artifice and the natural, the equivocal and the fleeting, the ambiguous and the ephemeral. The work Olfactive Suggestion is clearly distinguished from Face, realized in 1992. The second proposal on the theme of essences is a primarily intuitive work and is based to a great extent on improvisation.